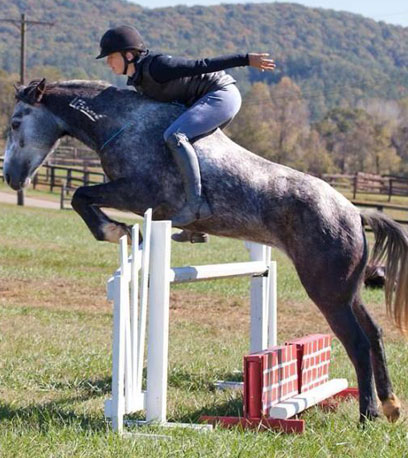 Riding horses since the age of two, Elisa has represented the USA internationally at the highest level of competition in the sport of three day eventing, an equestrian triathalon consisting of three phases: dressage, show jumping, and cross country. With her horse Simply Priceless (aka Johnny), Elisa has competed in 5 star events in the USA and Great Britain, and was named an alternate for the 2016 Olympic Games.

In addition to being an elite athlete, Elisa is also an advocate for American Mustang Adoption and the retraining of off the track thoroughbreds. To raise awareness about wild horse adoption in the US, Elisa has competed in numerous Extreme Mustang Makeovers. In 2012, she won her first makeover with a horse named Fledge, and in 2018 she won the Georgia Mustang TIP Challenge with Dorado. Elisa’s grey mustang mare named Hwin has been immortalized as a Breyer figurine. She regularly performs public demonstrations to encourage the adoption of wild horses held in BLM facilities throughout the US, and aspires to train a mustang to compete at the upper levels of three day eventing.

In addition to her advocacy of wild horses through the Mustang Heritage Foundation, Elisa also supports the retaining of off the track thoroughbreds through the Retired Racehorse Project. In 2018, Elisa won the eventing division at the annual Thoroughbred Makeover with Reloaded, and received the event’s highest award, America’s Most Wanted Thoroughbred.

As an extension of her advocacy work, and interest in promoting excellence in horsemanship more generally, Elisa is a very active YouTuber. Through weekly vlogs, helmet cam videos, competition footage, and Q&As Elisa shares her training process and chronicles the success of each of her horses. To learn more about Elisa Wallace, visit wallaceeventing.com.