Get in-person support from our award-winning wellness specialists Connect via Chat, Email, or Live Video today!

Insights from Human Touch team into our products, technology, and the Human Touch culture
Categories Filters
🡨 BACK

Harry Potter Actor, Jim Tavare, on the Road to Recovery

Anyone familiar with the world of Harry Potter knows that each of the characters play a special role, and they hold a place in the hearts of the entire world. We were all alarmed when we found out that Jim Tavare, the actor who played Tom the Innkeeper in Harry Potter and the Prisoner of Azkaban, had been in a horrific car accident in March. This head-on collision left him in an Intensive Care Unit in Los Angeles, suffering with a broken neck, a punctured lung, 15 broken ribs, fractures in both breastbones and multiple breaks in his right leg.

While in ICU, Jim had multiple blood transfusions and surgeries, but kept in good spirits as he shared his progress with his fans on social media. His wife, Laura, typed out his updates and shared images of him giving thumbs up signs, despite being rigged up to multiple machines and donning a neck brace. She also reached out to us at Human Touch, having heard of our Perfect Chair recliners and all that they could do for someone recovering from neck and back injuries like Jim’s.

After spending 15 days in intensive care, as well as time in the recovery area of the hospital, Jim was released to his home, where we had coordinated with Laura to provide a PC-610 Omni Motion Classic recliner with several upgrades including Jade Heat and Memory Foam PLUS. Using the PC-610, Jim will be able to alleviate much of the pressure and pain that would otherwise be on his neck and spine, which will help him to relax and to recover faster.

We were so impressed with Jim and Laura’s hospitality while we delivered the chair and were equally movedas Jim announced that the experience of receiving such a gift was “quite an emotional moment.” His dog Mr. Kippy, sat with Jim and also enjoyed the comfort of the recliner. Mr. Kippy’s story is also a miraculous one, as he was with Jim in the car during the crash, and needed the vehicle to be cut open in order to be saved. This image shows them both enjoying the Perfect Chair PC-610 Omni Motion Classic. 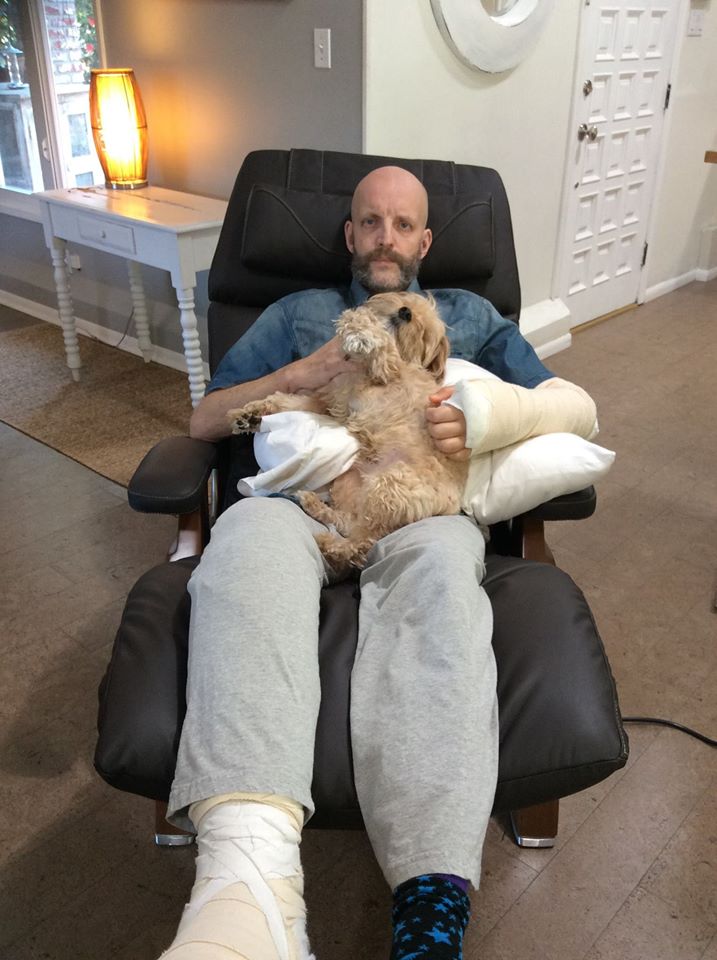 Laura and Jim have graciously invited us to join them as we follow along on Jim’s progress and recovery. We’ve already received so many kind words from not only the Tavares, but even their extended family and friends. We are in awe of the support system that Jim has to help him through this journey, and feel very humbled that we’ve been invited to join in with such a gracious group.

Follow along here on our blog, for regular updates on Jim and his recovery. And feel free to post your own words of encouragement to Jim’s Facebook page here.